1. To crush our Bavarian 2-row Summer Barley, we use a German 4-Roller Mill specially designed for brewery grist. 2. In the Mash Kettle, the grist is mixed with water which creates the mash. Our Decoction Mash is carefully heated in stages to convert the starch into sugars. 3. The mash is transferred into the lauter tun that has a slotted false bottom where the solids settle. This creates a grain bed that acts as a filter. Then the liquid is drawn off the bottom and recirculated until it runs clear. 4. This liquid (sweet wort) which contains the fermentable sugars, is transferred to the Wort Kettle and boiled for 90 minutes. Hops, which are the spice of beer are added for bitterness during the boil and for aromatic flavor at the end of the boil. 5. The wort is transferred to our Whirlpool where the tangential force settles out the hop-protein solids called trub. 6. Then the hot wort is cooled to 45 F in a one stage heat exchanger in less than 30 minutes. 7. Yeast needs oxygen. Since boiling has removed oxygen, by evaporation, the wort goes through an oxygenator before being transferred to the cellar where the yeast is added in line. 8. Fermentation, the process of converting sugars into alcohol, CO2 and heat energy begins when the yeast is added to the wort in the primary fermenter. 9. After approximately 10 days the primary fermentation ends and the young beer is transferred to aging tanks for slow secondary fermentation. In these low temperature (29 F) tanks the CO2 is bound in the beer (natural carbonation), the beer clarifies and mellows. 10. Our unfiltered, unpasteurized and naturally carbonated craft lagers are rare. The Hummin’ Bird and Red Oak age (lager) for at least 5 weeks. Our limited release Bock Beers age for a minimum of 12 weeks resulting in the complexly rich and smooth flavors. 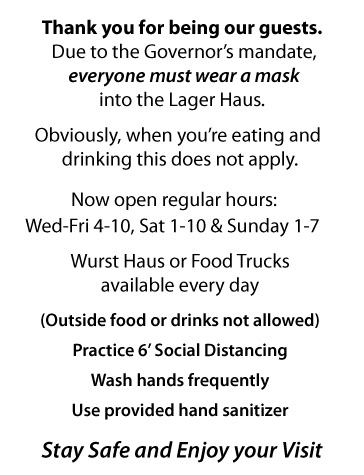